Ole's at the wheel, tell me how good does it feel!!

If the timing, rather than the decision itself, of Jose Mourinho's sacking came as a surprise, Man Utd's choice to replace him came as an even bigger one. Few would have predicted Ole Gunnar Solskjaer as a serious contender.
Even fewer people would have predicted the complete reversal of fortunes that Ole has overseen already at the club after just a few short weeks. A team that couldn't manage even the basics under the moribund Mourinho - a side that couldn't string a pass together - now cannot stop winning. 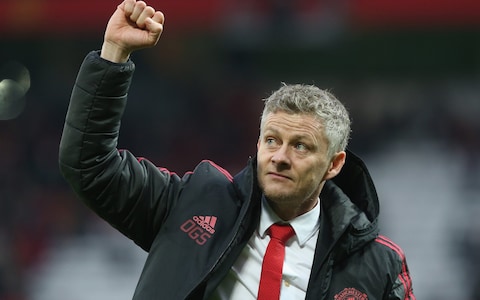 Mighty as a player but simply modest as a manager, forever - and perhaps unfairly - associated with a torrid and ill-fated tenure at broken-beyond-repair- Cardiff in 2014, Solskjaer's appointment at Man Utd raised eyebrows and posed many questions.

Those questions had not been shrugged off despite the best start of any Man Utd manager since the first great legendary boss of this parish - then just plain old Matt Busby. That was mainly due to the friendly nature of the fixture list that saw Ole's opening gambit take in a tour of the league's lesser lights. There's no easy game amid the brutality of the Premier League - but Cardiff, Huddersfield, Bournemouth, Newcastle, Reading  and Brighton are hardly the slaying of giants that's needed to throw down the gauntlet for any new United manager - caretaker or otherwise. But, in winning those games, he proved to be everything that his predecessor was not. Bright, breezy, and brimming with positivity - never has the mood changed so quickly. Not just winning, but doing so in a manner that us - and him as an exponent of Sir Alex's genius - had become accustomed to. Dangling the carrot of youth whilst instilling what we perceive as the "United Way" - Solskjaer just gets us. Put it down to luck if you wish, but Ole's shown tactical nous to outmanoeuvre two of his illustrious contemporaries in Messrs Pochettino and Emery. He's not been afraid to let Michael Carrick and Mick Phelan do the talking and has built up the players where Mourinho only knocked them down. Every player has been transformed to levels not seen since the halycon days of yesteryear, there's an identity, a vision and a plan now. Whatever Man Utd are supposed to be, this is it.
More than any of that, Solskjaer has given a disaffected squad unity of purpose once more, with Paul Pogba seemingly the epitome of a side rejuvenated by Mourinho's departure, and this run of wins has rebuilt fractured confidence and belief.

The odds on may yet be against Ole claiming the job permanently as other names, such as England manager Gareth Southgate and Atletico Madrid's Diego Simeone, are mentioned, but if he is undertaking an audition, wins like this do his chances no harm.

The acid test would arrive in the form of a team who had inflicted Mourinho's heaviest home defeat as a manager back in August. A team who had beaten the Reds three times in a row at home and who had again pooped the party to throw their weight around at the upper echelons of the table. But Ole passed that test, too, as he has every examination he has been asked to sit. The man can do no wrong and has made 659 million men, women and children believe in their football club once more.

That table looks a lot healthier now than it did after the debacle of Anfield that finally put Mourinho out of his misery. That day, the Reds were miles off the pace and closer to 18th-placed Burnley than Jurgen Klopp's leaders. The gap to place-above Arsenal was eight points. Chelsea, as they still do, sat fourth and eleven ahead of United. Ahead of the two teams heavyweight encounter at the weekend, it's mad how quickly things change. Separated only by goal difference from Unai Emery's men, Chelsea and Spurs are faltering fast and looking nervously over shoulders at Ole's runaway Old Trafford express, appearing ever nearer all the time in the rear-view mirror.

And while Solskjaer may not be the front-runner yet, he has done everything asked of him and this victory against a team in title contention - and with a manager in Mauricio Pochettino who many regard as favourite to be next in the chair at Old Trafford - was the biggest statement of his credentials yet. Test passed with flying colours.

Of course, there will - eventually - be a bump in United's road somewhere, but Burnley, Leicester and Fulham on the league horizon before PSG come to town - and with the might of Arsenal vanquished in the FA Cup - Solskjaer can only continue the momentum that he's built up.

All together now, Ole's at the wheel, tell me how good does it feel....

Posted by United Faithful at 16:52