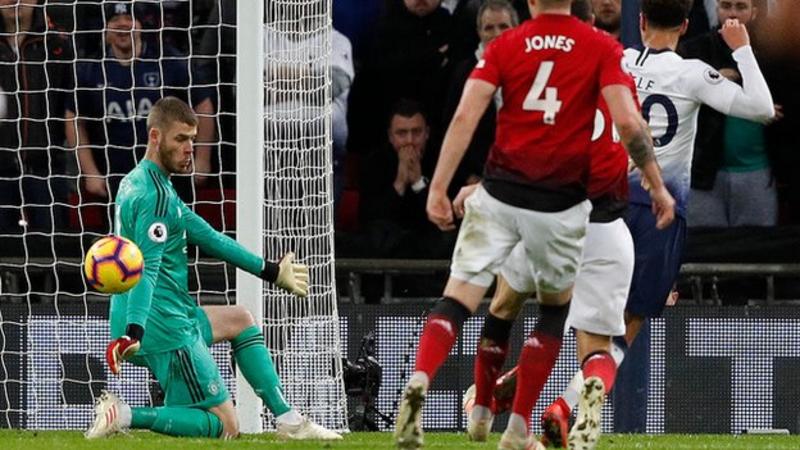 United made it six wins out of six under Ole Gunnar Solskjaer but were again indebted to David de Gea who made a string of superb saves as the Reds claimed victory at Wembley.
Marcus Rashford's eighth goal of the season gave United a slender half-time lead but it was one we had to dig deep to preserve as Tottenham laid siege to our goal after the break.
It was a clinic from De Gea, who almost single handedly kept Mauricio Pochettino's wasteful side at bay with stunning stops to deny Harry Kane thrice, Dele Alli and one-time Old Trafford target Toby Alderweireld.
The build up to this heavyweight encounter was dominated by the tale of the two managers - with unbeaten Ole facing his first litmus test against the man widely tipped to succeed him at the club. Solskjaer has well and truly thrown the cat amongst the proverbial pigeons after this result.

In a frantically frenetic opening foray, Spurs carved out the first chance of note when Heung - min Son collected the ball from deep and burst clear. He picked out the onrushing Harry Winks, but his low effort was saved by De Gea.
Jesse Lingard went close with a drive, and Rashford then called Hugo Lloris into action for the first time when he fired straight at the stopper after a swift counter-attack.

He saved well from compatriot Anthony Martial soon afterwards, Kane had a goal chalked out at the other end and Nemanja Matic flashed a shot wide from distance.
United had been dominant and snatched the lead in the dying embers of a half that had not disappointed. Pogba's perfect pinpoint pass picked out the red hot Rashford, and he did the rest with a superb angled finish that flew across Lloris and in.

Within minutes of the restart, it was Dave who was soon the busier of the two keepers. He made a routine save from the impressive Son, excellently thwarted Kane with his foot and produced a spectacular diving save to deny Alli's goalbound header.
Soon, Lloris was called into action once more as Pogba followed up his own deflected effort with a second attempt that the Tottenham captain blocked with a toe. 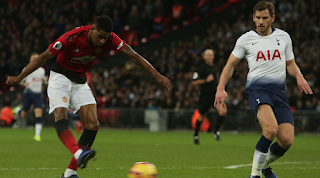 Erik Lamela and Kane went close in quick succession, but De Gea was proving unbeatable and showed just why he's the best keeper in the world. After a rapid Tottenham counter attack on 65 minutes Kane slipped the ball inside Luke Shaw to find Alli and as he broke into the area the Spanish stopper nariowed the angle and made another great save with his feet.

His feet were called into action again five minutes later as he somehow managed to prevent Alderweireld from a Spurs corner and he held the ball moments later from Kane’s curling free-kick.

De Gea continued with his incredible antics, firstly from Alli’s side-foot shot inside the box and then once producing another save with his feet to deny Kane.
Spurs continued to storm forwards, but the Reds defence brilliantly held firm to keep the increasingly desperate hosts at arm's length.
With the clock ticking down, Spurs weren't finished and fashioned yet another opening through substitute Fernando Llorente. This time, DDG beat away his countryman's header before the final chance of the game when the same player almost released Kane, but his whipped cross narrowly evaded the sliding striker.