United were blunted by Frank Lampard's Chelsea as two of the league's heavyweights served up forgettable fare in the teeming rain at Old Trafford.

Ole Gunnar Solskjaer's men had stormed to impressive victories against Newcastle and PSG but came up against a resilient and well-organised Blues team. In truth, a point each was a fair result from a lacklustre encounter, with the clean sheet the most positive aspect for both managers. 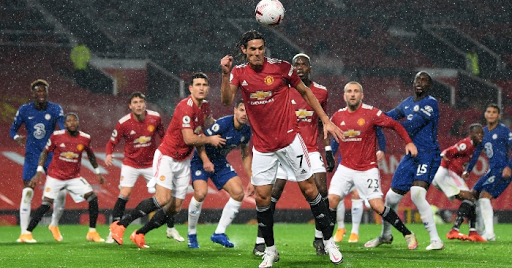 For two sides sprinkled with illustrious talent, particularly in attack, defences were on top with clear cut chances at a premium throughout, although Solskjaer's United arguably had the better of an evenly fought contest.

Expensively assembled Chelsea were indebted to new keeper Edouard Mendy, as - despite a first half aberration - the Senegalese international pulled off a hat-trick of superb saves to keep out Juan Mata and Marcus Rashford, twice.

Solskjaer named an unchanged side from the one which won convincingly at Newcastle with starts for Mata and Dan James. New signing Edinson Cavani was on the bench alongside Mason Greenwood and Donny van de Beek. Axel Tuanzebe could consider himself unfortunate to miss out after a stellar performance in Paris. Anthony Martial served the second of his three-match league ban.

The first major incident of note came after fifteen minutes when Mendy, in trying to pass out to the impressive Thiago Silva, got his wires crossed and put the ball out for a corner.
Mendy was called into action soon afterwards when he tipped wide from Mata after a neat move involving Bruno Fernandes and Rashford.

Chelsea felt they should have had a penalty shortly before half-time when captains Harry Maguire and Cesar Azpilicueta tangled at a corner, and replays showed that the United man was fortunate to escape censure for what looked to be a headlock.
Rashford went close, only to be denied by a good stop from Mendy, in the final moments of a half high in endeavour and energy but low on quality and attacking moments. 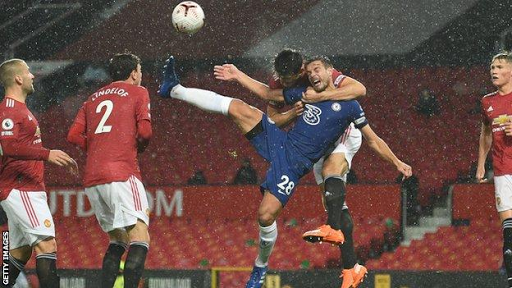 In truth, the United man - fresh from another amazing week - should have done better when played through Mata, but he fired the ball straight at Mendy and the Chelsea stopper blocked with his feet.
A clash with N'golo Kante left Rashford in some discomfort, but he soldiered on and would later switch to the left following the introduction of Cavani.

Mendy saved well from Fernandes again before Cavani almost made an instant impact having come on for James. Fred lifted the ball into the box and the debutant Uruguayan stabbed the ball goalwards, only to see his effort strike the side netting with his first touch in a United shirt.

Despite the visitors considerable firepower, David de Gea had little to do and was rendered a virtual spectator, with the United keeper restricted to goal kicks and taking crosses, notably from lively Chelsea wing back Reece James.

Fernandes chanced his arm from distance, with Mendy equal to the effort, but United simply didn't do enough to be worthy of victory. Solskjaer will be pleased with the clean sheet and the team certainly didn't lack effort or industry, knocking the ball around well but with a lack of end product.

This is not a match that will linger long in the memory, it was a shocker and, for a fixture that usually produces so much excitement and drama, this was a 90 minute non event.

Posted by United Faithful at 15:23