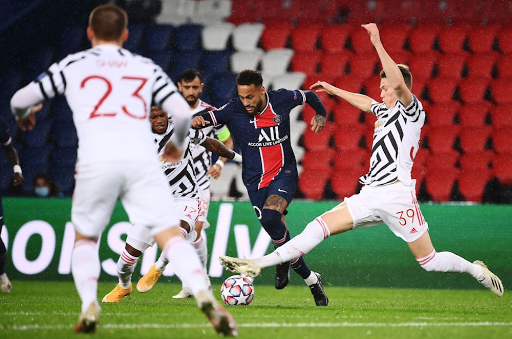 Manchester United opened Group H with a famous, improbable victory to get off to the perfect start in the Champions League's group of death. PSG must be sick of the sight of Ole Gunnar Solskjaer and Manchester United after lightning did indeed strike twice.

In the wake of a huge. monumental victory against all the odds - no one gave us a chance - there were some immense individual performances. Here, we run the rule over United's eleven heroes at the Parc des Prince.

United's Spanish stopper was back to his brilliant best. A lot like his manager Solskjaer, De Gea often produces his best when he's under the greatest pressure. Facing the best attack in world football, De Gea made a string of stunning saves, notably from Kylian Mbappe and Angel Di Maria, to keep the Parisians at bay. His best save came from the explosive young Frenchman in the second half, with a full length save to push his effort round the post. Solskjaer has kept faith with De Gea, and the keeper had repaid him spectacularly.

What a performance! Tuanzebe, on his first United appearance for ten months, was simply magnificent, colossal, heroic. On Europe's biggest stage, the young defender was tasked with shackling Kylian Mbappe and Neymar and rose to the challenge magnificently. He looked like he'd never been away. Arguably the best player on the pitch, Tuanzebe marshalled the defence heroically, won everything in the air, made every tackle, and forced his illustrious opponents down blind alleys. He last played against Colchester in December 2019 but yet you'd never know it. A stunning performance from a brilliant player. Is he the answer to United's defensive issues? A coming of age showing from the top drawer.

This was Lindelof's best performance for a long, long, long time. In fact, it was even maybe his best ever showing in the red (zebra) of United. Commanding, physical and uncompromising, Lindelof held the defence together, helped Tuanzebe, his positioning was superb and Lindelof never put a foot wrong. Has been much maligned but saves his best for the big occasion. The Iceman kept his cool in the firepit.

Shaw showed that he can be good as a third centre-back and slotted back into that role with ease here. Despite not been tasked to attack as much as often, Shaw still went forward when possible and linked well with Telles. Played in Anthony Martial to earn the penalty from which Bruno Fernandes scored, did his job well and shackled Di Maria well. Made a couple of excellent tackles and didn't shirk responsibility.

Dealt with PSG's much vaunted attacking trio brilliantly throughout. Never gave Neymar a moment, winning tackles, pushing him back and defended heroically. Didn't go forward as much as he at Newcastle, but this was a different remit entirely. There was one last-ditch challenge on Moise Kean that seemed to defy gravity and logic. A man who to be rediscovering his best form. Lived up to his nickname of the Spider. It almost seemed like there was... two Bissaka's.

An absolute colossus, Fred was huge, magnificent and heroic. Crunched in on Di Maria early (a bonus point for that), linked the play superbly and harried PSG into submission. Worked tirelessly throughout, he was pugnacious, tenacious, pressed high and rendered PSG's star studded midfield almost anonymous. Fred is not the most spectacular of players but does his job well, he's perfect for these types of games and showed why he can be so crucial. A wonderful showing from the little Brazilian.

Dovetailed superbly with Fred. McTominay covered every blade of grass, he was aggressive, energetic and made Neymar realise he was in a match from the first moment. Suffocated and stifled PSG, started attacks from deep and came close to scoring. Used his physically and robust approach to superb effect, making life difficult for Mbappe and co. A quietly impressive performance from the Scot, who replicated his performance in this fixture from 2019. Apparently played with one eye having lost a contact lens.

Too early to judge United's new Brazilian, but  it looks like United might have an excellent new signing. Telles looked good and created the most chances out of everyone on the pitch. United have a full-back who plays like an out and out winger. He seems to be adept at crossing and from set pieces. Particularly impressive in the first half, Telles didn't look overawed and was unlucky to be replaced. A fine debut. Linked up with Fernandes brilliantly

Had the bottle and elite mentality to dispatch his penalty at the second time of asking after Keylor Navas saved his first effort. His delivery caused issues throughout, he worked his socks off and linked play superbly. Fernandes was a little wasteful at times but always tried to make things happen. Fernandes could have had a hat-trick and was involved in the winning goal. Dovetailed well with Telles and the two strikers. Drifted in and out of the game at times, but led the side well and looked captaincy material. Taken off late on.

United's hero in Paris for the second time in as many years, repeating history with a famous, iconic, ice-cool late winner. Rashford had missed several good chances but tucked away his most difficult opening late on. Had dangerous moments but looked to have cost United victory with his profligacy until his late intervention. This lad loves scoring in Paris. Not only is Marcus Rashford MBE adept at feeding kids and standing up to government, he's not too shabby at scoring late winners in Paris either.

Had good moments as he caused problems for PSG in the first half and won the penalty from which Fernandes put United ahead. Returned to the fold in the midst of a domestic suspension, but never got going and looked to have cost the Reds victory with an inexplicable own goal. Martial headed into his own net in the second half, and never really got going. It's not been the start to the season the Frenchman would have wanted and he was out of tune in his native homeland.

Came on for Telles as Solskjaer went to a back four and deployed Pogba in a diamond. Pogba bought about a control in midfield, and added an extra dimension to the Reds attack. Got forward well, did his bit defensively and set up the winner for Rashford. Created chances and made a good block. A good cameo

No time to make an impact.

Deserved more than two minutes, I'd like to see more of the Dutchman but who do you drop? Had little time to make an impact but kept United nice and tight and kept things ticking over

Solskjaer has had his critics but he was brave, bold and his tactics paid off. A masterpiece from the United manager as he fought fire with fire, outgunned arguably the best side in the world and got his rewards. At the scene of his greatest managerial triumph, Ole came out on top again. He's very good in games like these.

Posted by United Faithful at 04:25