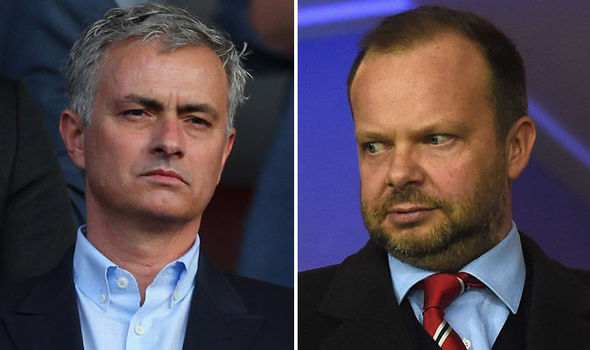 This club, honestly. On and off the field, we're a mess, a shambles, a club and an organisation with no plan, no thought process, no forward thinking and no vision for the future. I don't know who's in charge of this jumbled, upside down mess of a transfer window, but whoever they are is out of their depth and hasn't a clue. Manchester United are being run by business people who have no idea of how to run a football club, never mind the biggest one in the world.
United's search for a centre-back has lurched from Yerry Mina to Harry Maguire, to Toby Alderweireld and back to Maguire again. On Monday, it was a new name supposedly at the top of the hit list - with United having reportedly approached Bayern's Jerome Boateng. Before the World Cup, no one had heard of Harry Maguire, yet suddenly now United are prepared to bid a world record for him. When a move for Mina breaks down, suddenly Boateng pops up out of nowhere as a player we want. It's almost as if CEO Ed Woodward is pulling random names out of a hat in hope on a cuckoo land fantasy whim rather than any realistic expectations of getting our man. Muddled, confused, chaotic, scattergun and lacking identity - United's transfer policy in a nutshell. No clear strategy, and no idea of where we want to be as a club or indeed how we get there. In short, we haven't got a clue what we're doing. We need a change at the very top, above even the manager, if we're to re-establish the identity that has seemed to desert us since the twin 2013 departures of not only Sir Alex but also the now FA vice-chairman David Gill. Although officially a CEO, Gill was a director of football style operator, acting as intermediary between the board and Sir Alex. Gill was a master in the transfer market, recruiting shrewdly but without breaking the bank to ensure we stayed competitive and ahead of our rivals. He was smart, understood the game and knew how to work effectively in the market within the club's means. Those were the days. The role of a director of football often acts as a go between, answerable to the board but there to assist the manager in targets and transfers, often to help less experienced people in the football side of things. I believe we need this at our club.  A set up like this, often used by many top European clubs - Bayern, Barca, City and Arsenal to name but four, would work well at Old Trafford to apply a firm hand on the tiller, steady the ship and give us a flexible and forward thinking blueprint for the future.

I wouldn't be surprised if we end up signing no one and start the season with the calamitous and dead wood partnership of Chris Smalling and Phil Jones yet again. Even if by some miracle we do sign a centre-back in the last few days of this transfer window, we remained underequipped and undermanned. We still need a left-back and two wingers. The start of a new season should arrive with hope, belief and optimism, but instead there's a permeating feeling of negativity that is impossible to shake off. I can't remember the last time I, and many others, went into a season on such a low ebb and with such a total lack of faith and expectation in United. I'm completely dreading it, so much so, that I've written off our season before it's even started. A damning indictment but one that has been borne out of watching the club floundering and dithering in pursuit of our main targets, whilst our rivals - notably Jurgen Klopp's Liverpool - have acted swiftly and decisively.
It's symptomatic of United's muddled thinking, a club out of touch with fans and one
being run upside down by executives for whom driving our commercial conveyor belt is the number one priority.