Jose Mourinho and Paul Pogba have hit an unbreachable impasse

Jose Mourinho confirmed on Tuesday he had stripped Paul Pogba of his vice captaincy role
at the club but denied there was a rift between the pair. 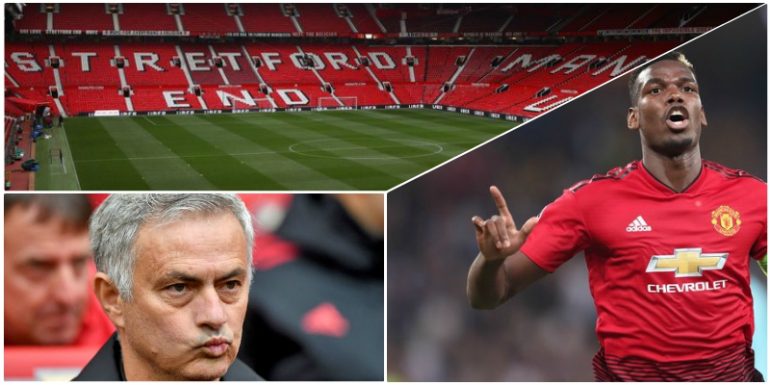 This feels like a significant moment for Manchester United.
It has been obvious for a while that Paul Pogba does not see eye to eye with the man responsible for paying a club record £89m to sign him from Juventus. It has also been clear for a while that Barcelona are keen on him.
Now, Mourinho has opened the door and has only succeeded in adding fuel to the fire.
But the big question is, which one of them will go through it?
Letting Pogba go would be viewed as a monumental failure for Mourinho and executive vice-chairman Ed Woodward given it is only a few months since the player impressed as France won the World Cup.
The alternative is to stick with him, but that would almost certainly mean Mourinho's position had become untenable given he was also blocked from signing the players he wanted in the summer.

The Manchester United manager is playing everyone as a fool if he thinks we’re all going to believe everything is rosy between the pair. It’s not and it hasn’t been for over a year.
Mourinho of old had an edge about him that made him great. He would feed on power and with that, his man management would get the best of out a group of players. This was evident at FC Porto, during his first spell at Chelsea and, of course, Inter Milan. Not Real Madrid. Not during his second spell at Chelsea. Not Manchester United.
Then, you throw player power into the mix. Sky Sports pundit Jamie Redknapp argued last night that you can sack your manager, but you can’t sack a player. I’d question him on that because his view would be very different on the toxic influence of some players if his dad, Harry, was the manager.
If United are going to get rid of one, why not get rid of both? Why do we, the fans, need to take a side and settle for such nonsense?
There is nobody doubting Pogba’s ability as a player but it has not worked out at United and we need to seriously consider recouping the £89 million it took to bring him back from Turin. It says a lot, too, that we have it from a good source that Pogba made it clear previously he wanted to join rivals Manchester City.
The constant negativity surrounding Jose Mourinho and Paul Pogba is circus-like and makes a mockery of Manchester United. A sense of pride is lacking.
Moreover, the Mourinho of old wouldn’t settle for being undermined by an egomaniac in the dressing room, which shows a shift in power and what good is he, as a manager, without having control over all of his players? The English media fell in love with a manager, who arrived at Chelsea with an edge and, with that he would become great. This is something very different.
This looks like a manager being held back by a club that prioritises commercialism over on-field matters, whereas the Mourinho of old would have lambasted Pogba for his multiple outspoken interviews rather than cover up their feud and take of us all fools. Mourinho’s edge made him great and now he looks deflated of that.
Hands tied behind his back, perhaps? That is inexcusable and the sign of a weakened Mourinho, who still persists he is blameless.
Fans shouldn’t be forced to take sides, but this is dragging on so long, it’s hard to ignore. Mourinho’s party politics with the fans is likely to reemerge, so be warned it’s only a show as there are no signs to suggest we’re on a path of further progress.
Mourinho will defend himself this week and probably point to how he finished second behind a strong Manchester City side last season, but that’s not good enough for Manchester United. We always aim to be number one.
Isn’t he supposed to be The Special One?
Wolves and Championship side Derby County came to Old Trafford in the past week and both outplayed Manchester United, though a common theme occurred after both games with Mourinho unwilling to take any blame.
So, where has the Manchester United I fell in love with gone? Nowhere. We’ll follow the club no matter what decisions are made, but the days in the sunshine are long gone and there is a need to rebuild on many fronts.
Getting rid of the self-righteous one and the French show-pony ought to be considered. Neither understands what it means to represent my club. OUR club.
Posted by United Faithful at 05:40