Put Ed Woodward in the middle and we're burn the f*****g lot!

As United's season hit its nadir with the home defeat to Burnley, the unrest was clear. The reworking of the chant usually reserved for our nearest and dearest from across the city and 'up the road' took on a new twist. 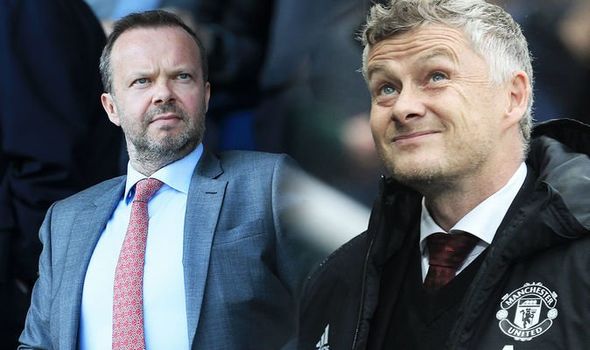 Perched high up in the post seats, Ed Woodward couldn't have failed to hear it. Neither could the Glazers, no doubt counting their millions and checking United's financial state of affairs on a far flung American ranch in the middle of Nowheresville. For all the talk of Ole Gunnar Solskjaer's future, there was no doubt where the anger was pointed at. This was the first game we have seen the United faithful stand in unison and as one against the Glazers and Woodward as a collective. The vitriolic chants aimed at the club's hierarchy were borne out of years of negligence and shameful ineptitude. The club is carrying a gorilla on our backs and it leaves us wondering when - or maybe if - football's greatest name will return to former glories.
Woodward's epiphany spelled out where the priorities lie in one of his bizarre "investment calls".
"Playing performance doesn't have a meaningful impact on the commercial side of the business." No other company so obsessed by money and profits would keep such a hapless operator in charge of all its affairs. How a man with no footballing knowledge at all continues to be allowed to make all the major football decisions at the club only shows the level of incompetence.

After months, no - years - of anti-Glazers apathy, this was the night when tensions spilled over in the stands. The tremors became an eruption as the owners, even in absentia, felt the full force of our fury. The pent up frustration, the hatred and the repulsion at these clowns, these vile pieces of s**t masquerading as football club owners finally hit boiling point. Old Trafford was virtually empty by full-time. Damning, but also encouraging as that will hit them where it hurts the most - their pockets. It's a catch 22 situation as the team needs our support but empty seats means empty coffers and that can only be a positive in this campaign to get them out. It only went to underline the depth of feeling.

It won't make a jote of difference - if the "Green and Gold until its sold" campaign didn't get these cancerous, poisonous, penny pinching puppets out of our club, then neither will a few dissenting voices from the terraces. But it makes you feel better and opens the eyes of outsiders as to where the real problems lie. Yes, Solskjaer is struggling, but he's being made to do so. I don't think he's the man for this job, its too big for him but the cancer have set him up to fail. They've rendered an an already difficult task almost impossible. Another United manager - the fourth in succession - let down by his board.
He's not David Moyes, Louis van Gaal or Jose Mourinho - a hired hand, an outsider, a foreigner with no connection to the club. The Norwegian, the hero of the Camp Nou in 1999, is all but impeachable even if the football is lumpen, the decisions baffling and there's no discernible style. All this has exposed an unsuitability for top level management, but its not his fault. And so it goes back to Woodward - no longer the manager's human shield, no longer the man lurking in the shadows out of harm's way. The man was paid 4.2million last year and for what?


While views about Solskjaer as a manager are mixed at best, the majority of fans believe our club's problems go much deeper. There's anger at a combination of what we perceive to be a lack of investment, huge amounts of money exiting the club in share dividends (with not a penny put in) and finance payments, and poor recruitment.
For that, we hold this board - who bought the club in controversial circumstances in 2005 - and Woodward, effectively United's chief executive since the exit of David Gill in 2013, responsible, which is why they are being singled out for criticism.
United's net spend this year was a shade over 60m. One of the richest clubs in the world in need of rebuilding spending three quarters of Harry Maguire's transfer fee on a rebuild. Woodward's seven year reign of terror has seen the club invest approximately a billion on transfers but yet here we are with a dogshit squad that's as thin as paper. It's staggering how bereft this hierarchy have left him - you can't legislate for injuries but everyone knew we needed another midfielder and we still haven't replaced Romelu Lukaku.
Whilst Solskjaer retains the backing of the hierarchy in the wake of the Burnley defeat, the pressure is mounting and he will eventually be the latest fall guy in the Glazers reign of terror.
Posted by United Faithful at 11:10