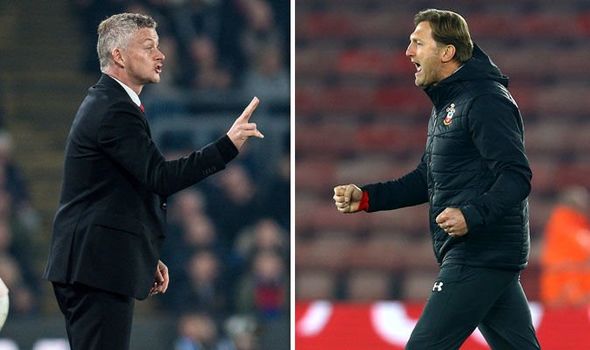 Manchester United face a Monday night fixture for the first time in nearly five months as in-form Southampton visit Old Trafford for the Reds penultimate home fixture.
Ole Gunnar Solskjaer is set to name an unchanged line up for the fifth game in succession - something that has not happened since 1993 and the inaugural Premier League season.

The Reds are unbeaten in seventeen games across all competitions and on Thursday became the first team ever to win four in a row by a margin of three goals or more - after racking up wins over Sheffield United, Brighton, Bournemouth and Aston Villa. United will move into third place with victory but face a difficult test against a Southampton side arriving in M16 in fine fettle.

Ralph Hassenhuttl's Saints have enjoyed a sharp upward trajectory since that dark October night that saw the south coast club on the receiving end of a record-equalling 9-0 defeat to Leicester. The team looked in relegation trouble for much of the early weeks of the season but a run of six wins in nine at the turn of the year helped pull Hassenhuttl's team clear of trouble.
The Southampton hierarchy stuck by the Austrian manager and have been rewarded with an impressive turnaround, with Saints beating Manchester City last time out and boasting a fine recent record at Old Trafford - avoiding defeat in four of their last visits (two wins and two draws). The Saints have done well since the Restart, claiming ten points from their first five games back, beating struggling duo Norwich and Watford before their backs-to-the wall victory over deposed champions Manchester City.

The battle for Champions League qualification is firmly in United's hands with four games left. Win these four 'cup finals' and the Reds will finish in that third spot - a superb return from Solskjaer's first full season in charge. Especially when you consider that Leicester sat 14 points ahead of United after 24 games and the Reds have spent much of the season on the fringes of the top four. Results went our way over the weekend, with Chelsea losing at Sheffield United and Leicester going down to a shock 4-1 thrashing at struggling Bournemouth to open the door for Solskjaer's in-form men.

Phil Jones and Axel Tuanzebe are the only absentees for United, but Southampton are without injured trio Moussa Djenepo (calf), Sofiane Boufal (thigh) and Yan Valery. The visitors will hope to have Jannik Vestergaard (muscle) available for selection again.
Saints striker Danny Ings scored his 19th league goal of the campaign last time out and the English net-buster is on the verge of becoming only the third Southampton player to reach the 20-goal mark in a Premier League season, after legends Matt Le Tissier and James Beattie.

Ole said: "There's so many things you have to consider when you manage a team, we've got players here champing at the bit and those that are in the rhythm.
"I have a lot of decisions to make, but the players help by playing and performing well. If we don't get too many injuries, there's no reason to change much when you're going well.
"There is a lot of planning to do - when do we start the league? It depends on so many factors, how we do in Europe for example. So we can't really decide on the training programme. There are so many small decisions that can make a big difference, sometimes these are out of your hands so you always need a plan for different scenarios.
"Southampton is a very fine football club with a strong tradition. I've got huge respect for the job Ralph has done there, you know what he's doing and he deserves a lot of credit for turning it round there. The way they play is direct, it's high energy, and hard working so we know what we're up against and it will be a difficult one for us."