Ole Gunnar Solskjaer has the same problems as his predecessor

So how many square pegs have been jammed into the gaping round hole that is the Manchester United defence? Ander Herrera came and went against Tottenham, Scott McTominay endured widespread ignominy at West Ham, Nemanja Matic at Southampton and now Ashley Young - a 34-year-old former winger - at Wolves. All have appeared in a back three since August. Even the rubbish Marcos Rojo (again, why is he even still here), emerged from the physio's room to cameo in a defensive trident that is never a deterrent for opponents.

For a squad that has sporadically used a defensive trio, United's record in the 3-5-2 is dire; played six, won none, drawn two, lost four and conceded 15. All six opponents have scored at least twice and one of them - Southampton - felt so short-changed they sacked their manager two days later.

On a day Jose Mourinho reminisced about his time at the club, United endured a performance comparable with his final months. There was a porous back three, Paul Pogba had to accommodate McTominay and the result was negative. It is now three defeats from the last four and the longest of managerial honeymoons has finally ended. The carriage is turning into a pumpkin. 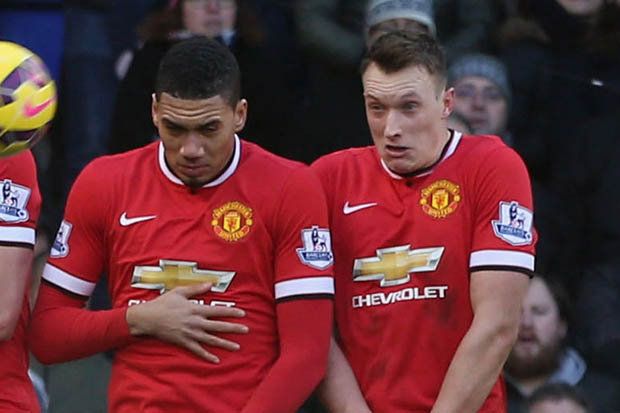 Mourinho was mulling over playing Matic in a back three during pre-season and United's dearth of quality centre-backs was going to be a problem, regardless of who the manager would be. Solskjaer has enhanced Victor Lindelof and Chris Smalling but United do not have a collective back three capable of functioning. Smalling and Jones, as is their wont, followed up a secure display against Watford with an insecure one.
Just like the Tottenham fixture contrasts last year, it was catastrophically and cataclismically clumsy and featured an own goal. Different manager, same problems.

United sources said they were prepared to pay £100million for the perfect profile of defender in August and they need to do as they say. It is one of two areas in their squad (along with the right flank) where they are going have to pay a premium. United have spent £76.9m on centre-backs in the last five years whereas Manchester City shelled out £182.7m on bolstering that department with four additions. Liverpool spent £75m on Virgil van Dijk alone and their five-year total on centre halves is £127.7m. United? Rojo, Smalling, Jones and Young received renewals this season and last. What was it The Notorious B.I.G. rapped? It's like the more money we come across, the more problems we see.


Money might be a solution for Paul Pogba, though. In these shallow times, the go-to method for clubs to reinforce a player's focus is remuneration and Pogba's regression has been so stark Ed Woodward might resolve to offer him a substantial pay hike. His Excellency was not excellent again at Molineux, where the gloves came off from Pogba. He tossed his mittens at the away dugout in a first-half where he was switched from left to right with McTominay. How it must smart for Pogba that, even with McTominay's biggest champion no longer at the wheel, he is now the apple of Solskjaer's eye. Caption this. The definition of irony.
The starry-eyed fans forget how destabilising Pogba was until Solskjaer was installed as caretaker manager on December 18 and he was at it again during his time with France. Pogba fluttered his eyelashes and sent flitartious advances in Real Madrid's direction as the Spanish seduction began last week in Zinedine Zidane's press conference.

Gary Neville sussed Pogba when he was at his zenith in February. "In the back of my mind, the problems that we witnessed in the first two years will emanate again at some point. Because I think his agent will be into him, he'll be wanting his little move away, he'll be wanting his next pay-off and that's my problem with it. His commitment to the club has got to be long-term." Mino Raiola advised Pogba to rejoin United on the proviso he move to Spain after three years. If United are to scupper that plan, the panacea for the puppeteer and Pogba is more money.
Pogba is not the only individual playing as though his head has been turned. David de Gea was as timid as Hugo Lloris when Jonny's cross dropped in the six-yard area and his lack of bravery suggested he did not want to muddy his kit. De Gea's protracted contract negotiations are relevant, considering errors crept into his game four years ago - when he was about to enter the final year of his previous United deal. Alexis Sanchez has left the United attack and wage structure lopsided.
And beyond the soft centre and marquee mither, the right-sided forward position was occupied by a right-back in Diogo Dalot against Wolves. Another square peg in a round hole.

Posted by United Faithful at 07:42