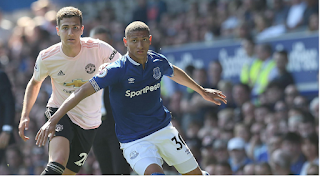 At least Ole Gunnar Solskjaer will avoid an Easter Monday execution. Five years on from their Easter Sunday humbling at Everton, Manchester United were as defeatist and listless as they were under David Moyes in a week they were ejected from the Champions League to ensure a trophyless season. Only they were worse. Solskjaer will not meet the same fate that his predecessor but two did back on this day in 2014, but the plethora of problems were once more exposed to the full by a rampant Everton in damningly brutal fashion.
City and Liverpool are going for the Premier League, United are outside the top four, unlikely to secure Champions League football, Chris Smalling and Phil Jones are still starting, there are no leaders and the manager is starting to look out of his depth. Just like five years ago. United have come full circle.

The problem at United is not the manager. How can it be when we're four bosses down the line but no further forward. We tried thinking outside the box with the Moyes experiment and failed. We tried the proven, world class big hitters in Louis van Gaal and Jose Mourinho and failed there, too. Now we've got one of our own. Solskjaer faces the same rancid, rotten structure and the same not good enough, mentally weak players. The sulphurous dressing room rallied for three months in the wake of Jose Mourinho's removal but Solskjaer's predecessor had sussed many of them. Whatever characters there are in the squad, they are not good enough and those deemed good enough do not have the required character. Jose Mourinho was right after all.
United have not reached the expiry date of that six-year Moyes contract and they are in the same position as they were in the first post-Ferguson season. If the board did not just consist of Glazer siblings and economics graduates - and also had a football presence - then change would be inevitable. Instead we've got a useless, ragtag jumbled collection of discombobulated pieces in the corridors of power. Disinterested Yanks and a glorified banker in Ed Woodward (or should that be w****r). They have lurched from knee-jerk decision to knee-jerk decision on a bi-annual basis and their complacency and incompetence is unmatched among the elite. Astonishingly, the structure is expected to remain unchanged for the upcoming summer transfer window. Poisonous leeches killing this club, bleeding it dry and ripping its heart out. If Manchester United are to improve, the board must be sacked. I'm sick of saying it now. Spineless, gutless, pathetic, embarrassing and a shambles. How can you go into a must win game like that and not even bother to put in a performance. Everton ran 4k further than United.. With top four on the line, Everton were simply stronger, fitter, quicker, faster and wanted this more. I can accept losing but I simply cannot accept a bunch of lazy, can't be arsed players not putting effort in. Disgraceful.

This was the season's nadir and Woodward was fortunate the United supporters were housed in the opposite stand at Goodison Park. There were chants of 'Attack, attack, attack' and it wouldn't have been a surprise had they restarted 'Jose's right, the board is s***e' six months on from the intense Newcastle encounter. The lack of a football presence on the board and the players are the bigger problems than the manager, just as they were in August.
United have fallen so far their following had to resort to heckling Vincent Kompany over City's failure to win the Treble. City have won something, just as they did last season, and they might complete a unique domestic treble. The irony is the highlight of United fans' run-in might be City extending Liverpool's championship drought by another year. 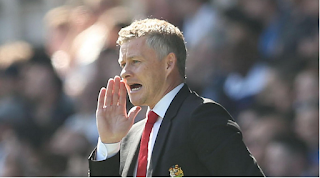 United are destined for a sixth-place finish and Europa League football. Solskjaer needs to preside over his own squad cull. Antonio Valencia and Ander Herrera, back in training but not back in the squad, are both going and Matteo Darmian and Marcos Rojo were omitted from the squad again at Everton. Plenty of those involved should not be at the club next season. Nemanja Matic, starting for the first time in three weeks, moved as though ploughing through quick sand. Fred and Phil Jones were replaced by Ashley Young and Scott McTominay at the pause, which was tantamount to rearranging deckchairs on the Titanic.

United were reduced to being ironically cheered by their own supporters for merely stringing three passes together with Everton 4-0 up and in cruise control.
And, yes, it was that bad.
Solskjaer's side were quite simply over-run and did not even show the heart or fighting spirit to escape from a joyous Goodison with any dignity on a desperate day.
There was simply nothing good about this United performance. Indeed, given Everton's superiority, they were fortunate the scoreline did not have an even more embarrassing appearance.
Paul Pogba walked around midfield while Idrissa Gueye, Morgan Schneiderlin and Gylfi Sigurdsson snapped into challenges, and it was a nightmare return to Everton for striker Romelu Lukaku.
Taunted throughout, he could not do a thing right and his afternoon simply went from bad to worse.
He was not alone. De Gea may have saved well from Richarlison early on but he was slow to react to Sigurdsson's shot and it was his punch that fell at Lucas Digne's feet to score. The Spain keeper is having an awful season and is finished at the top level. Another game, another costly high profile error.
It was five years ago to the day since a 2-0 loss here ended David Moyes' calamitous ten month tenure - and this United performance was even worse than that.
Solskjaer has inherited a mess, the early gloss from his arrival has worn off and players like Pogba and Lukaku, who were revived after Mourinho was sacked, look back to their bad old ways.
Now there is the small matter of the derby against title-chasing Manchester City at Old Trafford on Wednesday. Oh what fun that's going to be...