Manchester United hit a second half salvo to move into the top four and to within two points of the Premier League summit.
United - ragged and rotten for the best part of an hour - turned the game on its head as half time substitute Bruno Fernandes set up Paul Pogba to hammer home the leveller. Alex Telles then teed up Mason Greenwood for a trademark finish before another sub, Marcus Rashford, raced through to lob home the third late on.

It marked a ninth successive away day victory and maintained United's 100% record on the road, despite
having falling behind in each of them. Despite a series of Jekyll and Hyde showings, the result took United within touching distance of the top after another stunning second half comeback.
Solskjaer clearly had one eye on this week's heavyweight double header with Leipzig and Manchester City as he left out Fernandes and Rashford, with both nursing minor injuries to their ankle and shoulder respectively.

On a day when 2,000 fans returned to the London Stadium after the lifting of the national lockdown, with London in tier 2 allowing a limited attendance - Solskjaer's decision was one that looked to have initially backfired.
The Hammers started at breakneck speed with United unable to get to grips with the energy and industry of David Moyes in-form side.
Jarrod Bowen had an early goal correctly chalked out for offside before Pablo Fornals headed into the side netting when well-placed.

The Reds were fitful and failed to trouble the West Ham defence at all in the early stages with our best chance falling to the misfiring Anthony Martial. The Frenchman had a daisy cutter from distance that took a deflection off Aaron Cresswell and looped over the bar.

But West Ham went closer still with that man Fornals again heavily involved. The rejuvenated Sebastien Haller linked up with the impressive Declan Rice and the latter found the Spanish forward, only for Fornals to toe poke off the post with Dean Henderson beaten.
Paul Pogba tested Lukasz Fabianski from distance, but the Reds failed to heed the warnings and fell behind yet again seven minutes before half-time.

It was another set-piece that proved the Reds undoing, as a corner was flicked on by Rice to Soucek, who knocked the ball in from all of a yard beyond a static United backline.

Haller slipped in the box when clean through and a lunging Aaron Wan - Bissaka challenged bailed out the visitors after Bowen had burst clear. Given their chances and territory, Moyes' men would have been a little disappointed to only be 1-0 ahead at the interval.

For the second league game in a row, Ole made two changes at half time as his big hitting match winners, Fernandes and Rashford, came on to replace Donny van de Beek and the injured - and anonymous - Edinson Cavani.

The fresh personnel failed to bring about a change in fortunes, however, at least not initially. The impressive Bowen flashed a shot wide and Vladimir Coufal went close with a header, whilst Scott McTominay fizzed wide from distance at the other end.

Martial then picked up an injury, forcing Solskjaer into another change as Juan Mata came on for the stricken Frenchman.
But it was Martial's compatriot, the much-maligned Pogba, who produced the goods in spectacular style to drag United level. Henderson thumped the ball downfield to find Bruno, and the Portuguese schemer in turn picked out Pogba to power a stunner beyond the helpless Fabianski from distance. It looked as though the ball may have drifted out of play, but VAR replays looked inconclusive and the goal stood,

It finally sparked Solskjaer's United into life, and there aren't more devastating sides that this United one at full throttle.
Three minutes on, and the Reds moved in front as we cut West Ham to pieces with a swashbuckling second. Inevitably, Fernandes was involved as he exchanged passes with Alex Telles and the left-back crossed for Greenwood to control, pivot and half-volley home with aplomb. 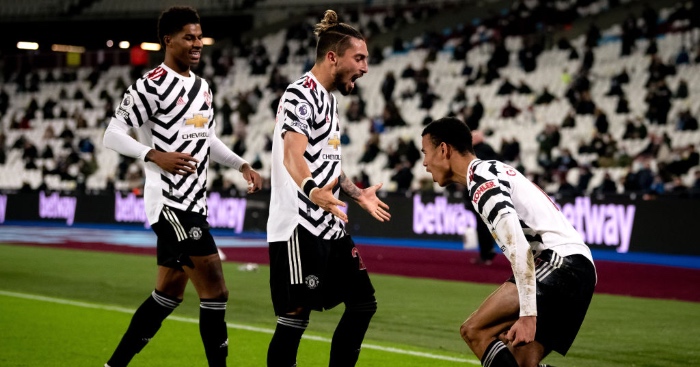 Rashford fired off the post as the Hammers - so comfortable for so long - suddenly looked ragged in the face of a United onslaught. The east London side were still reeling having seen their lead become a deficit, but the Reds did not relent and put the game beyond any lingering doubt on 78 minutes.

The finish was as good as the build up as Mata's magnificent touch and vision released Rashford to race through and clip the ball beyond the advancing Fabianski.
United had turned the game on its head but were still made to work for the win, as Henderson saved superbly from a Cresswell free-kick in the closing stages.

Henderson held another effort from sub Manuel Lanzini and Said Benrahma curled an effort over, but there was to be no late sting in the tale as the Reds went fourth.

Overall team performance: 6/10
United Faithful Man of the Match: Marcus Rashford. Changed the game with his pace and creativity.