United battled back from a poor start at St Mary's but were still forced to settle for a disappointing draw against the struggling Saints.
Mark Hughes' men raced into an early 2-0 lead through Stuart Armstrong and Cedric Soares inside the opening 20 minutes, but Marcus Rashford's individual magic set up Romelu Lukaku and the recalled Ander Herrera for two goals in six minutes to equalise by the break.

But having restored parity, it was another underwhelming display by United and Saints had the better of the second half - looking the more likely to win it.
Jose Mourinho's team selection was affected by injury, with a makeshift back three of Phil Jones, Scott McTominay and Nemanja Matic with Marouane Fellaini and Herrera in front of them in an unorthodox 3-5-2 formation. Ashley Young and former Southampton man Luke Shaw were wing-backs with Eric Bailly and Chris Smalling absent from the squad and Marcos Rojo only fit enough for a place on the bench.

The players seemed  at a loss to get to grips with the system, as McTominay and Jones appeared to get in each other's way in the build up to the opener. Michael Obafemi, on his full league debut for Saints, collected the ball and picked out Armstrong, whom in turn fired a fine finish across David de Gea and in for his third goal in as many games.

Southampton had scored with their first attack of the match, and moved 2-0 in front with their second eight minutes later. Rashford brought down the impressive Mario Lemina on the edge of the box, and Cedric did the rest in glorious fashion with a sumptous set piece from 25 yards out that no keeper in the world could have got near. 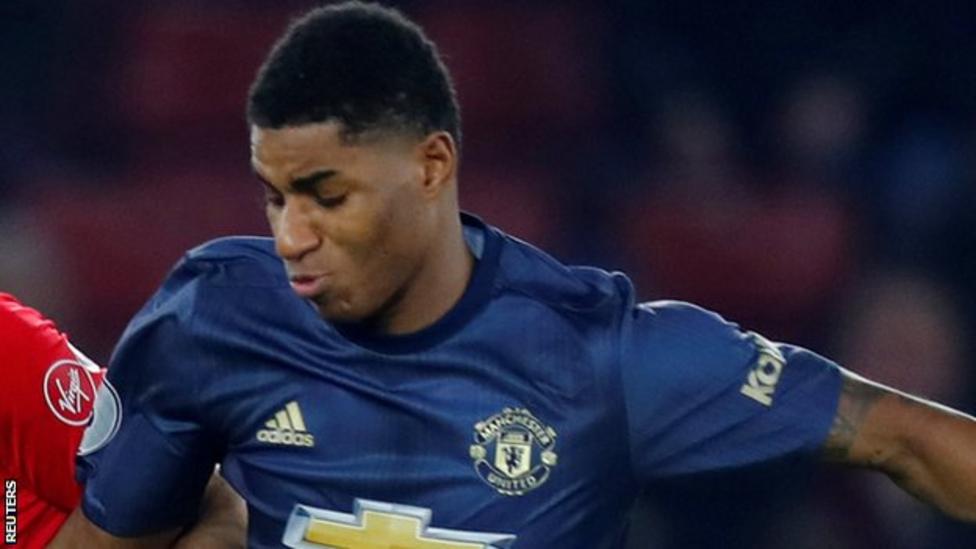 The Reds - playing in their dark blue away kit - were rocking and reeling, but found a flash of inspiration the shape of the much criticised Rashford. First, the 21-year-old latched on to a long ball from Fellaini, bounced off a half-hearted challenge from Maya Yoshida, and cut the ball back for Lukaku. Even the Belgian, without a club goal in 12 games and almost three months, could not miss this time as he applied a simple finish beyond Alex McCarthy.

Rashford then did even better shortly afterwards, beating three defenders on a surging run into the penalty area and finding Herrera at the near post, the Spaniard providing a clever backheeled finish under the keeper.

Fellaini headed over the bar, De Gea saved well from Nathan Redmond at the other end, before Shaw went close from distance when he fizzed a shot wide.
Saints substitute Manolo Gabbiadini tested DDG, whilst Pogba's acrobatic effort did likewise for McCarthy as both sides looked for an elusive winner.
Diogo Dalot came on for his league debut, but Saints were the stronger and went close again through Redmond, who tried his luck with a 30-yarder, only for De Gea to come to United's rescue again as he tipped the winger's effort over the bar to safety.